The dedication, hard work and enthusiasm that the Year 8 LAMDA pupils put into their lessons, culminated in the Year 8 LAMDA Showcase. David Phaure, who has been providing LAMDA classes for over eight years, reviews this year’s performance.

LAMDA Acting sessions have been running at Farleigh since 2011 and have been a huge success with over 100 children attending from Years 3 to 8. The sessions are not just about acting, but children gaining self-confidence through communication and script reading. LAMDA has a 100% percent pass rate with some children gaining marks of over 90%, which is extremely hard to achieve. Last year, 30% of the children achieved Distinction (80%+). One pupil, who really did not believe in herself or think she was good at acting, achieved 89% - what a star! The average mark last year (2017-2018) was 78%, which is excellent.

I believe these sessions should be exciting and fun, but with the end result of realism in their acting. The children should believe in, and be confident in what they are performing, and above all, enjoy what they are doing. Encouragement is easy but watching children grow in confidence grow is spectacular!

This year, we ended with a Year 8 LAMDA Showcase which was brilliant. Freddie and Polly performed excellent interpretations of Shakespeare's, Launcelot Gobbo from The Merchant of Venice and Viola from Twelfth Night, respectively. They both grasped the language and delivered speeches that they truly understood. We saw some great duologue work, with Leonora and Olivia keeping the audience entertained with their comedy from The Players. Leonora and Olivia also performed their monologues and it is great to see pupils continue to be as confident when performing alone. Ona performed an effortless Miss Trunchball from Matilda, confidently directing the speech to an innocent parent (as Matilda) in the audience! Ona also performed Cloud Busting, a duologue with Daisy, in which they showed how to really stand up for yourself in a bullying scene. Elijah produced a very naturalistic and pacey performance from DNA, as well as a collaboration with Charlotte on Cloud Busting, with Charlotte, the daintier of the two (obviously!), giving a convincing performance as the bully. Annabel and Flori took us back and forth in time with their performance of Time which showed clarity, warmth and heartfelt moments. Charlotte ended the show with a fantastic unrushed monologue, great vocal and facial expressions - again keeping the comedy alive.

What I loved about the Showcase and typical of Farleigh pupils was the incredible support they gave each other. 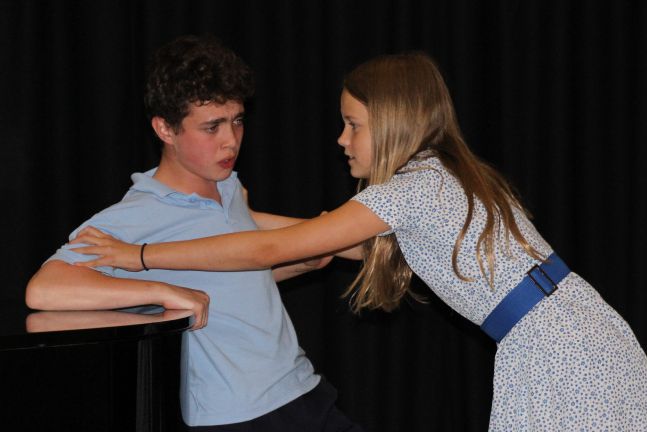